As a resident of Reno since 1981, I have great appreciation for this city, and am fascinated by the rich history that lives here. So it’s no secret that I’ve become a proud member of the Historic Reno Preservation Society, a local group dedicated to preserving the history of Truckee Meadows/Reno Nevada through education and advocating efforts.
I recently caught up with my friend Deb Hinman, managing editor for HRPS, and invited her to join our blog today to discuss what I believe is a pressing issue: the endangerment of a renowned University neighborhood. A group of beautiful historic homes may soon be demolished by the city, with recent plans to tear them down only to make room for larger, taller, newer buildings. Read on to learn more about how the HRPS and other concerned citizens plan to preserve these treasured Reno homes, and whether or not any advancements have been made.

Check out a Photo Gallery of the Neighborhood: 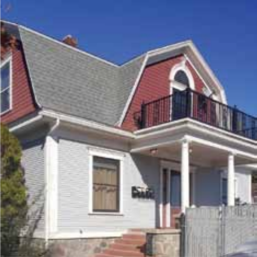 Q) So Deb, What’s the Latest with the Neighborhood?

A) Originally, as you know, the University owned the properties.  They have since acquired the Folsom/Atcheson house and the Donnels house, giving them all six Victorians on the west side of No. Center, the block between 8th and 9th streets.  And this is where Marc Johnson is bound and determined to put his massive, three-story business building.

Before the hue and cry from historic preservation groups and other concerned citizens, they were slated for demolition, though Johnson indicated people could move them if they paid to do so.  We (the Historical Resources Commission) suggested he place the building on the east side of Center where only one historic home and an unattractive concrete apartment block would need to be sacrificed.  Johnson won’t give a good reason why this can’t happen, he just reiterates it needs to be on the west side.
This whole issue was kind of shelved, as the university did not have the funds to build the business building.  But apparently they have now found funding and are looking to get started.  There was a report to the UNR Faculty Senate on Nov. 19th:  they announced they have a commitment that they will relocate the six houses in question.  They say they will make “every attempt” to keep them together and that they are considering a site south of the freeway that is now owned by the state.

Q) So what Does that Mean for the Houses?

A) Obviously, we prefer that the houses be moved rather than to demolish them but we are not enthusiastic about relocating them, either.  For one thing, it has happened that historic homes have been moved but no plan existed for them and they ended up suffering from “demolition by neglect.”  We could see this happening in this instance as well, as the university has not announced any plan to use the houses, either as residences or through adaptive reuse.  But the most critical issue with moving the houses, in my view, is that they will lose their historic significance when removed from their context as an integral early part of the university community.
They will (if cared for) be a bunch of cute little houses but in short time, no one will know or care where they came from or who occupied them.  For 120 some years, university staff, professors, high school teachers, parents and students lived in these houses and gave life to this neighborhood, sitting on their porches visiting with neighbors or passing students, walking to classes or strolling the quad on summer evenings.  I feel they are every bit as much a part of the campus as Morrill Hall or the Mackay School of Mines.